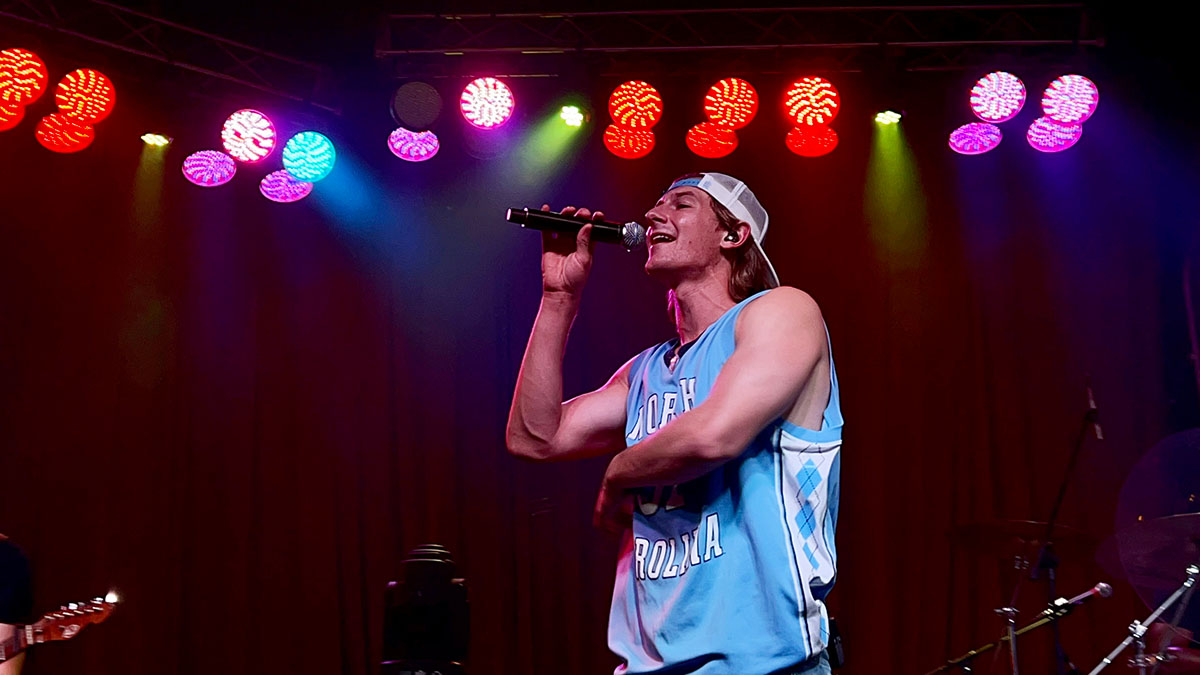 Here in North Carolina, we have a huge array of diversity in the music industry, from hip-hop to R&B, to Country, and the list goes on. Cooper Alan is no exception to this. From his humble roots, TikTok has witnessed Cooper grow from a small-town celebrity into a full-blown country music icon overnight! Taking a chance and posting his first video in early 2020 while the world was taking a break, fans quickly fell in love with his classic country sound.

Ever since an early age, Cooper has seen music as a way to express himself and a way to connect with family and friends. For him though, it became a reality to be able to create that experience for others. After just over a year on TikTok, with millions of streams and with the fanbase he developed, he was ready for life on tour.

We found Cooper at one of his stops this year at Coyote Joes in Charlotte, NC. The night started off with “Out of the Blue” Rockin’ Coyote Joes. They had us grooving to the beats of likes from Journey to Rascal Flatts. The ambiance- The Drinks- The Music were all pumping out vibes above and beyond expectations.

Over 500 people came out that Friday night. By 7:15, Cooper Alan fans were already pouring in and lining up to hold their ground for the 11 pm show.

As the night rolled on, we connected with a few concertgoers, and they all said that TikTok helped them find out about Cooper and they were so glad to have stumbled across him when they did. They liked the all-familiar sound of the classic heart-throb country with the flare from a new voice thrown into the mix. Cooper headlined with a jaw-dropper, catching the crowd by surprise when he jumped on the stage to Eminem’s track “Without Me”. We feel that this lets him show his diverse taste in different genres while also stating that country artists don’t have to live and breathe just country music.

Throughout the rest of the night, Cooper showed us the fun-loving, laid-back person he shows the internet. He played original songs and fun remixes, such as his “Colt 45 (Country Remix)”. He played us an original, “Can’t Dance” towards the beginning of the set and encouraged the whole venue to start dancing like a fool, and it worked! Cooper opened people’s hearts that night with his song “Hitting Your Friends Up”. He told us the story behind the song, and how the contents of the song happened amid his proposal to his now fiancé.
While he was singing, he spotted a couple getting engaged as he sang about proposing himself! He stopped singing and gave these two their special moment. This only made everyone more and more excited to spend the rest of their night belting the words to every song played.

Cooper Alan has one of the most promising up-and-coming music careers today, from his natural stage performance to his sweet songwriting skills. Cooper has over 9 million fans from around the world, on his side. Be sure to keep up with his TikTok & tour dates right here on rBeatz Radio as Cooper highlights the hottest tracks, past, present & future with his cool country Cooper twist.